You’d never guess, but the Lakes Region of NH has a huge variety of Live performance venues from large concert Pavilions to smaller more intimate theatres and opera houses! Come catch a play, a live concert or cultural event… and stay in comfort at the NASWA Resort!

The NASWA Resort is the perfect home-base for exploring the entertainment opportunities of the Lakes Region! Have a pre-concert dinner at the Blue Bistro, or a post-performance beer at the NAZBar and Grill and spend the evening in the most FUN place on Lake Winnipesaukee!

While you’re here, check out the listings and upcoming shows at: The Lakeport Opera House is in the heart of the Lakes Region. They are an elite venue offering a blend of high-end style and historic charm. They offer live musical performances, theatre productions, and other community-focused events. This 140-year-old building has been beautifully renovated and is also available to host corporate events and other private gatherings. 20% Off Exclusively for NASWA Guests ONLY! Fun for the whole family.

Save 20% on your Tickets to Recycled Percussion’s NEW SHOW Redonkulous when you book your stay at the NASWA Resort! Welcome to the world of “REDONKULOUS”, where anything & everything happens. With the natural progression of 3 crazy guys who have performed worldwide, including 4,000 shows in Las Vegas, the time has come for the ultimate party. Two years ago, we broke ground in building our own venue, “The CAKE Theatre.” We are the only band in the country to fully own their venue and produce/perform their own shows! We spent millions to create the ultimate Las Vegas experience not in Las Vegas but in our home state of New Hampshire.

Well, when you own your venue, there are NO RULES. We have the biggest sandbox to create the ultimate show experience for all ages. Our NEW show, which we have fittingly named “REDONKULOUS,” has a perfect blend of music, dance party, & antics all blended together, leaving you feeling electrified.

About the CAKE Theatre
Recycled Percussion is making history. After two years in the making, millions of dollars invested into the project, and hundreds of hours of creative design, we present to you The CHAOS & KINDNESS EXPERIENCE, better known as THE CAKE. THE CAKE Theatre is Recycled Percussion’s very own performance venue, as well as a venue available for much more.

We’ll e-mail you your discount code in a confirmation e-mail once you book your stay… We can’t wait to see you! 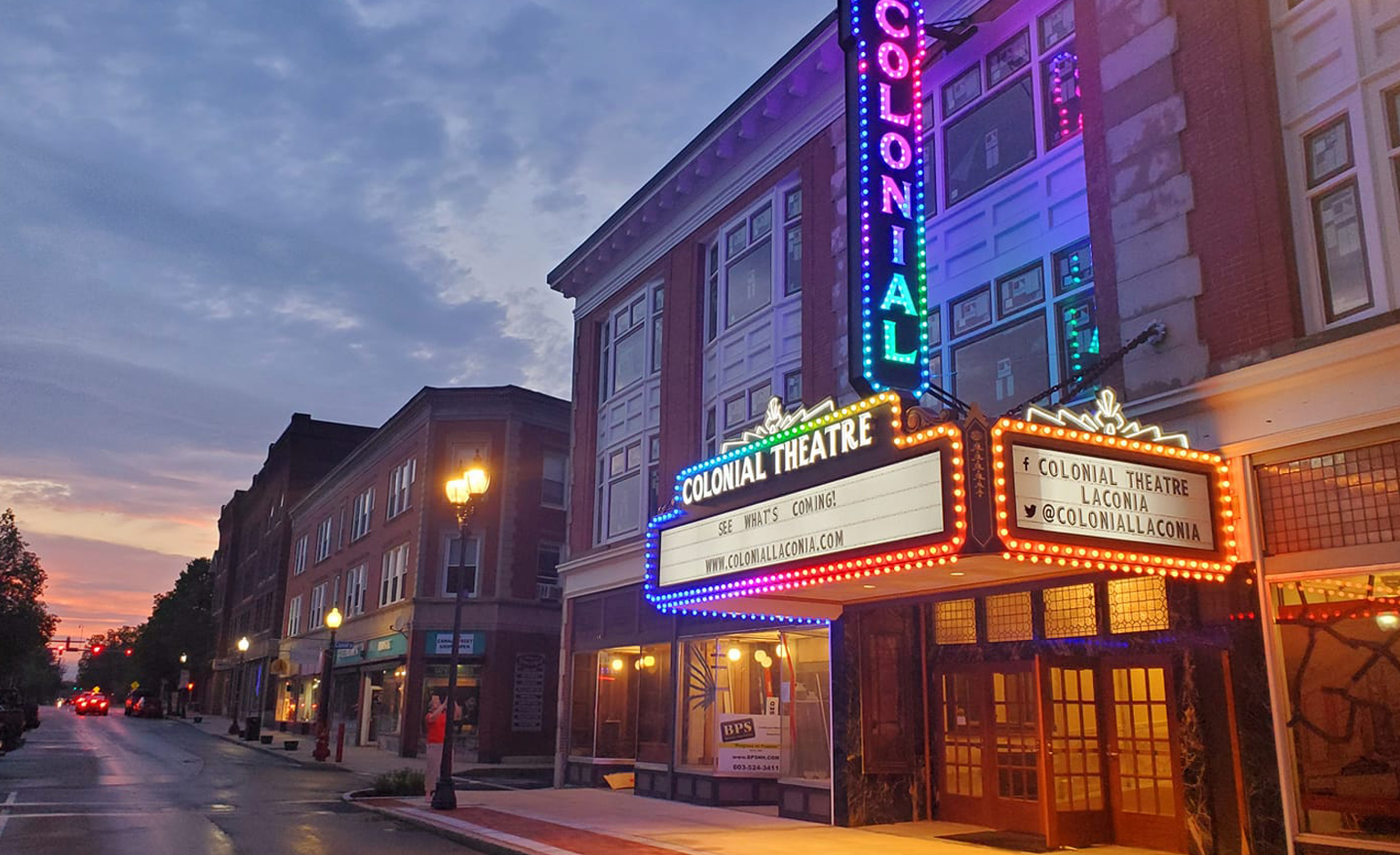 First opened in 1914, the Colonial Theatre was designed by George I. Griffin. Original owner Benjamin Piscopo was from Venice, Italy, and the theatre featured a fire curtain depicting Venice as seen from the water. The theatre hosted a variety of stage productions and photoplays. By the early 1930s the Colonial had pivoted to show motion pictures. In 1983, the theatre was divided up into 5 separate movie screens. In August of 2002, the theatre closed after 87 years of operation.

On June 15, 2015, the City of Laconia announced a partnership with the Belknap Economic Development Council (BEDC) to purchase, renovate, and reopen the Colonial. 609 Main Street LLC was created to conduct the capital campaign for the renovation. The restoration of the Colonial began in March of 2016, and is scheduled to conclude in early 2021.

The newly reopened Colonial Theatre has a seating capacity of 761, and plays host to a wide-range of performances, including music, theatre, comedy, and civic events. The Colonial Theatre is managed by Spectacle Live, and is home to the Powerhouse Theatre Collaborative, program of Belknap Mill. With over 9,000 seats available to music lovers from across the world, Bank of New Hampshire Pavilion stands as one of the greatest outdoor venues in the region. Evolving from a humble origin as a grass field venue on a tree farm, the pavilion has since become northern New England’s premier summer concert venue. The venue’s comfortable space and the world-class acts it attracts has even earned it honors in USA Today as one of their 10 Best Concert Venues Across the USA, with several nominations from the magazine’s peers. The outdoor amphitheater has even gained recognition for adaption, as the venue changed names twice to reflect its evolving focus, direction, and place in New Hampshire’s music scene. The Winnipesaukee Playhouse is a nonprofit organization that serves to develop and stage professional and community-based theatrical productions and to provide opportunities in theatre and the performing arts for the community.

We aim to provide a fun and challenging theatrical environment for all Lakes Region locals and visitors in both performance-based and educational arenas. Whether your interest is to be onstage, behind-the-scenes, or in the audience, The Winnipesaukee Playhouse has something for you!

The Playhouse was founded in 2004 with the vision of bringing quality arts and arts education to The Lakes Region. The theatre has become a cultural gem in the area winning both critical acclaim and becoming an important outlet for the performing arts in central New Hampshire. 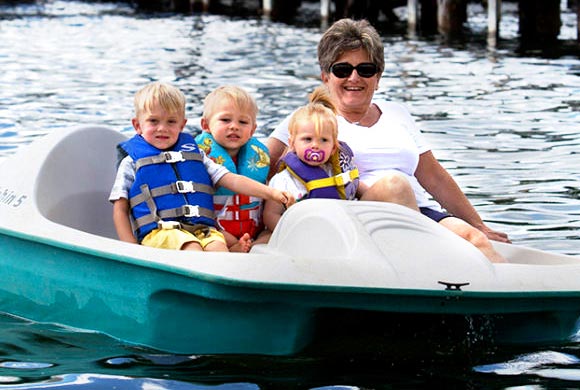 With outstanding amenities, a central Laconia location, and the perfect room for every guest, The NASWA Resort is the perfect place for your summer vacation. We are located directly on Lake Winnipesaukee, boast the largest private sandy beach on the lake, and offer free boat slips for our guests. 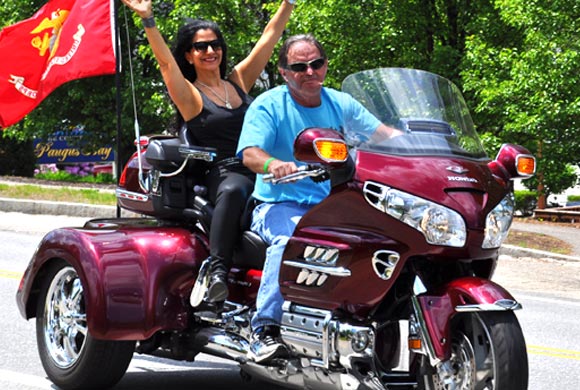 We are always adding to our events calendar to make every stay special. Join us for fun theme events, like our Mardi Gras Weekend, our legendary birthday celebration, Parrothead Weekend, and Reggae Fest. There is an event for guests of all ages to enjoy at The NASWA Resort. 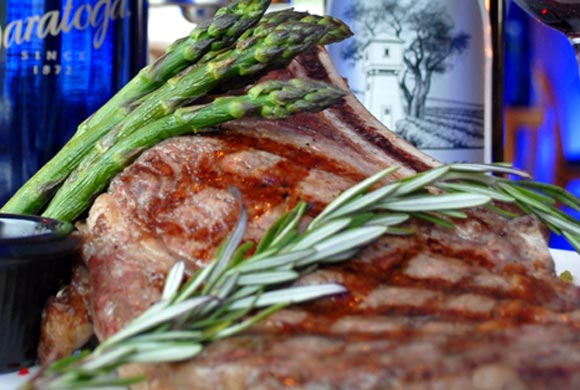 The Blue Bistro offers Brilliantly Crafted Cuisine to our guests and visitors of the Lakes Region. Join us for delicious dining and delightful views of Lake Winnipesaukee. 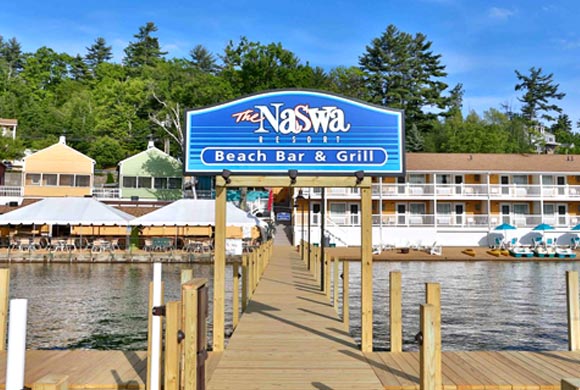 There’s plenty to do all summer long, and plenty of memories to take home with you. Start making them now – your summer stay is a click away. Book your summer stay on our website now for the best price and experience.

BOOK NOW
CONTACT US
Check out the current specials and save big on early season bookings!View Specials